This morning I was out at the barn loading the furnace with firewood when I noticed the digital temp display go blank, and the circ pumps stopped running. Since the furnace is on the Skybox which is operating grid-tied, this is very unusual. I went inside the barn and sure enough, all the backed up loads were without power while the direct grid loads (mainly lighting) were still on. No tripped AC breakers. I went to the Skybox screen and it had no alerts (see screenshot below) but grid and load panels indicated 0 watts. Unfortunately I didn't think to take a picture, but it didn't look like anything was obviously wrong - all the breakers were still on, same with the external load breakers in the barn aux panel. I bypassed all the backed-up loads to direct grid supply and they all came on. Switched back to Skybox and lost them again. So then I rebooted the Skybox and everything returned to normal.

No alerts and nothing unusual in event history (except no indication that grid was lost during the reboot sequence). I'm wondering if this has happened before and Skybox reset itself without my being aware of it, because it was just dumb luck I was there to witness it this time. With the Skybox system being remote from the house and Optics' alert emails for grid outages being non-functional, I never know what's going on out there unless I'm looking at Optics, and even today there's nothing showing up there to indicate a problem.

Long story but wondering if any otherSkybox users have had similar experiences? TIA - Mike 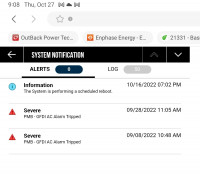 Yes, this happened to me one time before, I can't explain it. No power to the protected loads, yet grid was alive and well. I was not able to find any evidence that the grid was outside spec. I only caught this situation about 5 hours after it happened so hard to say what if anything would have caused this. no alert emails were triggered.
Top

Thanks for that. I do have a wasp nest somewhere near the top of my Skybox and I'm thinking maybe they did something but good to know others have experienced this as well.
https://ei.tigoenergy.com/p/pZXn7SZQyO45
https://enlighten.enphaseenergy.com/public/systems/Hctc107221
Top

I've had similar odd outages. Skybox seems to be very sensitive to these things. I wish they would build a bit more intelligence into the system.
Top

This just happened to me yesterday in the morning. Was out skiing and when I returned both of my systems had this problem.
Both systems were powered by the grid but not feeding any power through to loads. No error messages.
I rebooted both systems and they started operating normally.

I can only speculate that there was some grid anomaly that triggered this problem. I have a separate system which monitors the grid but it didn't show any grid fault, however.

These are two separate systems, each with their own service entrance and power meter. These are both connected to the same utility transformer at the street. Both of the systems failed in the same way.

This also happened to me a while ago. Same problem... both systems just stopped feeding power to loads but no faults were recorded. Reboot fixed the problem (I was on 1.5.30 on both systems... just updated now to 1.5.33)
Top

Not good. Add to this the fact that Skybox doesn't send grid outage notifications via "alerts" and you've got little assurance your loads are protected. Hate to badmouth it, but it is what it is. So to speak...

Alert problem noted in forum last December viewtopic.php?t=16945&hilit=Alert, and I sent an email to OB reporting the problem last January. 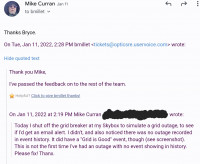 When this happened earlier this year, I was out of town so didn't know about it and couldn't access the system to reboot.
At least this time I was around so the systems were only down for a few hours.
It is very disappointing that we can't rely on these systems.
Top
Post Reply
7 posts • Page 1 of 1