gday guys i have just upgraded my array and outback system
and now have more components than ports available on my hub 10,

Now i have added another fm80
and i have another hub 10
how do i connect this so all components show up on my optics re site showing the correct data?

thanks for your help

I'd maybe contact OB sales and ask how it's done. I wouldn't think this is the first time its been asked. There should be a diagram somewhere.
Top

thanks raysun , i have looked in the manual s that i can find online and nothing is mentioned , but yes i beleive that i am not the only one that has come up against this

will send an email

Now i have added another fm80
and i have another hub 10
how do i connect this so all components show up on my optics re site showing the correct data?

thanks for your help

All self-designed and self-installed

But based on your profile, looks like you have 2 separate systems with 2 separate batteries. If you're looking to integrate their data onto a single Optics data display, you're probably out of luck.
http://www.tigoenergy.com/site.php?95b2dca2-ca6c
https://enlighten.enphaseenergy.com/public/systems/Hctc107221
Top

gday Greg thanks for the quick reply

yes you are correct

so i have room for the 5th charge controller

but what if down the track i do want to ad more devices is it possible to add another hub 10 and have it all show up on optics re?

gday mike , yes two seperat systems , but i am not looking to combine them on optics as its fine to view separate

Good that we got that settled ;-)

I have to copy Mike C's answer on that one, for now. "You're probably out of luck"
Greg T Fordan
EngTech
Outback Power Technologies
Top

Follow up answer. If you notice, there is a slot for a second MATE3 or MATE3s in hub10. That is non-operational, do not use it. That was probably the planned solution for your question of devices that will exceed 10, add that MATE3/MATE3s then daisy chain another hub 10. I do not know the reason why they did not pursue.
Greg T Fordan
EngTech
Outback Power Technologies
Top

not adding more than 10 devices to one system only?

Aore Adventures wrote: ↑Wed Feb 17, 2021 3:04 pm i thought mike was talking about combining both systems not being possible

not adding more than 10 devices to one system only?

yes. hub10 and hub10.3 were designed to carry up to 10 devices plus the MATE3/MATE3s/AXs port. One battery bank.
Greg T Fordan
EngTech
Outback Power Technologies
Top

Take a look at my profile

Basically a single system, but my FX’s are on own HUB, Mate3S and therefore controlled separately. I suspect you might be able to do something similar.

Each Mate3s has it’s own OpticsRE, both a subs to higher level site.
I can view them individually or combined. I don’t know what limitations if any
Below is screenshot of combined. Notice upper right pull down to see how structured 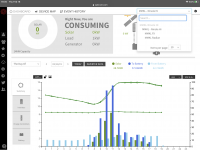 All self-designed and self-installed

David, that's pretty cool. So is that summary page showing both systems, with some data totaled (e.g., the energy numbers) and other (like SOC, looks like) shown individually? The voltage graph looks to be only one battery, unless the two systems track that closely...can you elaborate a bit?
http://www.tigoenergy.com/site.php?95b2dca2-ca6c
https://enlighten.enphaseenergy.com/public/systems/Hctc107221
Top

Going to try and clarify a bit. Will try post/edit so not to lose anything. Will end up 6 pics of same day.
I picked a day last year when I know both generators ran. The FNDCs were a bit out of sync. I’ve seen that happen from time to time but not reasoned why as they monitor same battery and shunts. As for shunts
A= my Radians, B = my FM80s, and C = my FXs 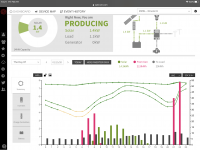 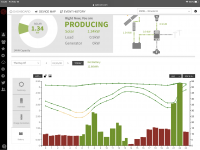 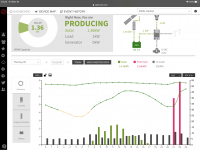 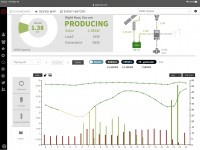 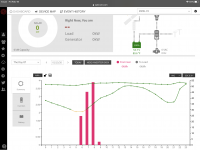 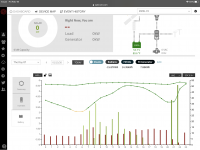 So I’m thinking what the OP desired maybe possible, maybe some limitations: 1 Mate3 to 1 Hub 10. Each it’s own system under a common site. Each Mate would only display its HUb connected components, but the OpticsRE site would give a total pic.

Note on FNDC non sync. As said, no clue as to why, but have learned over time that they usually resync next time 100% charge and CPM. I do have same settings on both as they see same battery.
As to how they share shunts (so you don’t have to find that thread), it was too difficult to run w sets of leads to the already installed shunts so I just piggybacked at the Radian FNDC and hoped the additional wires wouldn’t be an issue. Been in service 13 1/2 months now. If you notice the .0x difference in shunt values, I’d didn’t try to determine, just assumed it was internal to each FNDC.

ETA:
There is Temp reading on FX screen as I do have the RTS mounted there. Figured it likely had little to no effect on charging as no PV / CC.
David
Please visit http://vacation.ninolehawaii.com
Top

Might want to have 2 separate shunts installed in series, each FNDC with its own shunt.
Top

having the 2 FNDC on the same shunt might create interference and skew the reading a bit and that why you have different SOC readings. also the Mate3s is uploading the data randomly and I observe that part of the reading from a certain hour might be reflected to the next hour.
Top

EA6LE-ONE wrote: ↑Sat Feb 20, 2021 3:27 am having the 2 FNDC on the same shunt might create interference and skew the reading a bit and that why you have different SOC readings. also the Mate3s is uploading the data randomly and I observe that part of the reading from a certain hour might be reflected to the next hour.

Possibly true, but I doubt much cause for concern in my case. But if I understand you correctly - each FNDC with its own shunts? That would be a challenge wire unless I’m missing something. Shoot, without a major hassle I couldn’t even get in to run the second sensor wires off the shunts, can’t imagine finding space for 3 more unless the 2nd GSLC and then having to double wire the inverters and CCs, getting more complicated.
Then with two sets which do you believe?

Here is combined SS of today
Graphs running pretty close, close enough not to be concerning. 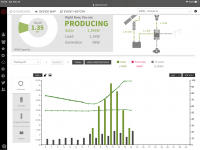